Sitting on a bench offers more than rest. It offers time to contemplate, reflect and experience. 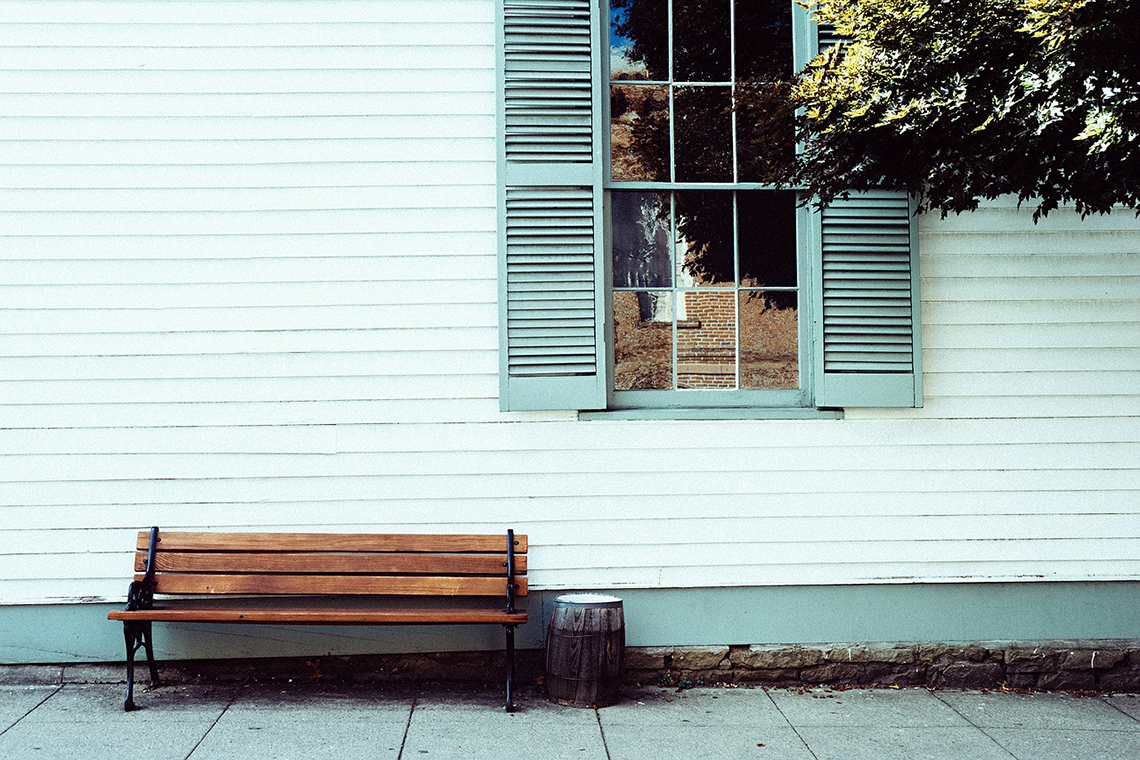 Park benches are an everyday feature in most parts of the world. Typically, they offer respite for tired legs, a momentary break from the office or a moment’s rest while the children burn-off excess energy. You might not think of them as the basis for art but for Professor Matthew Sansom, they have become just that.

Park Bench Sojourn is a multimodal research project which foregrounds artwork as a central part of its methodology. In the academic context, this is known as practice-based and practice-led research. It is an approach which recognises that in addition to science-based forms of empirical knowledge, there are other categories of knowledge and understanding accessible and expressed through arts practice.

For Professor Sansom, these kinds of knowledge emphasise notions of meaning and purpose, which he argues make this type of research, and the arts in general, essential to academic enquiry and university life.

This project is built around the activity of taking some time-out or a sojourn (i.e. a temporary visit) on a bench. The website parkbenchsojourn.org, home to this digital media project, states that “Park bench sojourns are experiential and require participants to find a bench to sit on for the purposes of the sojourn. […] You are invited to participate in the project through the selection of sojourns available, any number and type, as appropriate, per outing.”

Professor Sansom describes how this project explores the ways in which our sense of “who we are” is shaped by the digital technologies that determine so much of our everyday experiences.

It questions what it means to be human; surrounded, as we now are, by computer technologies and digital media, living lives which are perpetually “connected” and dispersed through the cloud. In particular, it reflects on how our technologically determined lives and lifestyles conspire against us to find opportunities to stop, reflect and be witnesses to lived experience.

The sojourns themselves vary in nature (the website lists 10 types), with each one emphasising a particular sense and kind of experience. For example, “audio sojourns” comprise listening to audio recordings made from other benches while “sight sojourns” require you to watch video recordings which silently replay views from other benches.

Choosing a “voice sojourn” allows you to listen to a disembodied narrator describing what they see, hear and experience from yet another bench. The various kinds of content are all available on your mobile phone through downloading or streaming.

Other iterations of the project, distinct in that a bench is provided for you, have included a multimedia gallery installation juxtaposing content from a variety of sojourns and a therapeutic VR version. Regardless of the format, context or specific content, all sojourns serve the same end — to provide a bench-based aesthetically reflexive moment-in-time.

At its simplest, the project is about awareness. In detail, each of the sojourns augments experience in a way that combines and contrasts the present and embodied, with the absent and virtual.

The idea for Park Bench Sojourn arose from Professor Sansom’s practice as a phonographer and sound recordist around 2011. Looking for ways to present audio recordings that included a contextual and conceptual element, he had the idea to curate audio recordings made from park benches. He did not act on this idea immediately though.

Between 2012 and 2015, he worked on an ecological-arts research project, Landscape Quartet, which explored the creative and theoretical possibilities of artistically interacting with the environment. Funded by the UK Arts and Humanities Research Council, this practice-based project resulted in a wide range of creative works including installations and performances (in galleries and in the environment itself including a Vietnamese rice field and a Swedish forest), as well as audiovisual works and journal articles.

The key aspect of this project was that he, alongside fellow researchers Bennett Hogg, Sabine Vogel and Stefan Östersjö, made sound art and music that were participative with the environment. It was this element that complemented and extended Professor Sansom’s earlier ideas for what was to become Park Bench Sojourn.

In part, Park Bench Sojourn is a response to a tension in the Landscape Quartet’s work related to a cautiousness towards field recording due to the ways recorded sound can become objectified and fetishised. Whilst sharing this concern, Professor Sansom’s focus in Park Bench Sojourn is less about intervening with the environment through art and more about participating with nature through everyday activities such as walking, stillness, watching, listening, feeling and reflecting.

Park Bench Sojourn moves away from the overt participation of Landscape Quartet as the means to recover our connection with the environment, and towards a simpler contemplative witnessing of our place within nature (not as something separate from us) and our experience of the world as it unfolds around us.

The final area of interest, a consistent focus in Professor Sansom’s work, is in the links between aesthetic experiences and changes in consciousness where we feel a “loss of self”. Such experiences are well documented across a number of areas, in particular those related to creativity, arts and musical practices. Over a number of years his research has drawn on a wide range of ideas and in Park Bench Sojourn, the scope widens to include 13th century Islamic scholar and mystic Ibn’Arabi.

Complementing the idea that sojourns are simultaneously one thing and another (present and embodied, absent and virtual), Ibn’Arabi’s esoteric thought on the metaphysics of unity explains that the mystic’s view of True Reality, from which all things arise, comprises two different angles — (1) as the Essence of all phenomena, and (2) as the manifestation of that Essence.

The idea that two subjective aspects of one reality can co-exist mirrors the heightened qualities of aesthetic experience as well as, argues Professor Sansom, moments when we retreat into more contemplative states which park benches, and park bench sojourns, both represent and enable.