Exploring the world from behind a trombone 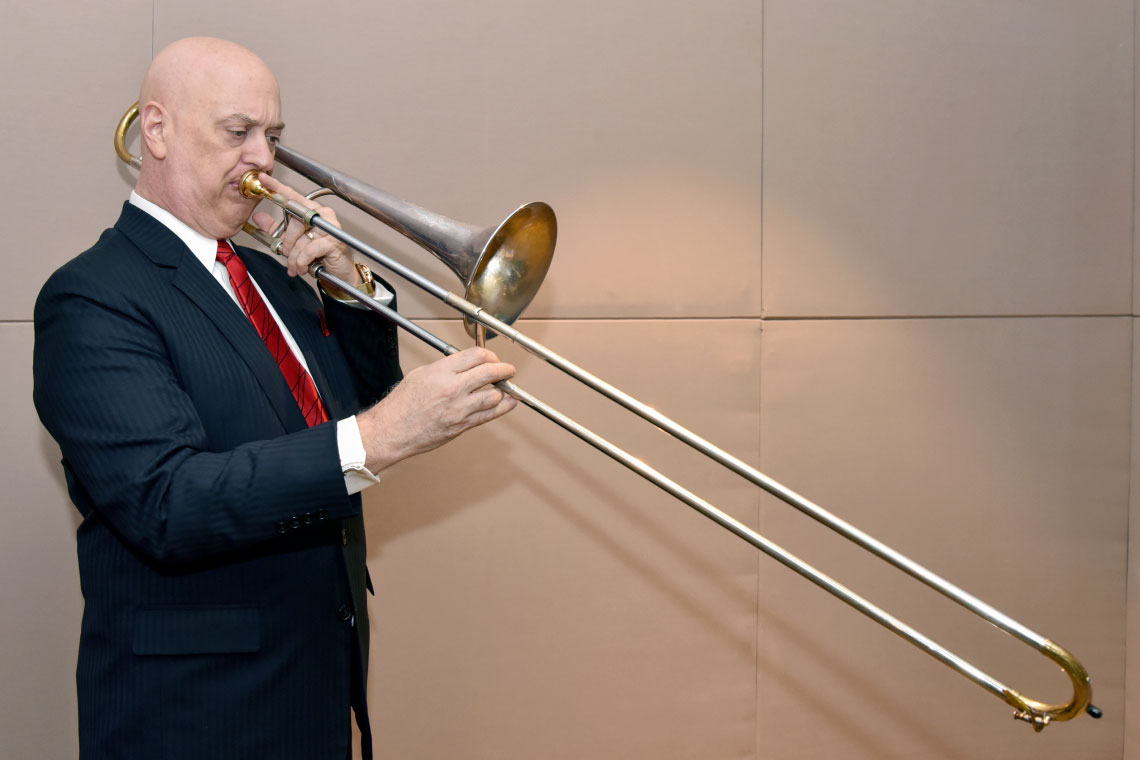 In 1994, I was playing the trombone on the main stage in a cruise ship somewhere on the Caribbean Sea. I was playing with the 5th Dimension, a pop/soul/R&B band that had its biggest hits almost 30 years earlier. While performing, I was flooded with emotion from a long-lost memory.

Most people have many memories from their childhood but not me. In fact, I have almost none from before my mother died in 1969, when I was 10 years old.

As we played the band’s 1967 hit Up, Up and Away, I suddenly remembered being home with my mother while that song played on our stereo. We were both singing along while I ran around the room holding a blanket over my head, pretending it was a balloon.

This memory had been obviously buried in some corner of my mind for many years, but music was able to bring it out. This is the power of music.

My mother earned a Master of Arts degree in music from Northwestern University in the 1950s, and regularly sang or played piano with her church choir. When I was a budding high school jazz musician, I found her record albums in the basement.

I was surprised to discover that she had a very hip collection for a Methodist preacher’s wife, including original issues of two classic albums by Dave Brubeck. This led to another special moment in performance when I played with Dave Brubeck and the Cheyenne Symphony Orchestra in a 1986 concert.

My mother passed away when I was in the fifth grade, which at that school was when children chose an instrument to play if they wanted to join the school band in sixth grade. I do not remember whether this decision was made before or after she left us, but I do remember being told that the family already had a trombone in the attic so I should play that. To this day, I do not know why we had that horn in the house.

Both of my brothers (I was in the middle) also played in school bands, though neither went on to pursue careers in music.

When I left Los Angeles to play in a travelling band in 1982, my plan was to return within a year or two. I even left furniture with friends.

Instead, I went from one road band to another and ended up starting a Doctor of Arts in Trombone Performance and Jazz Pedagogy at the University of Northern Colorado. I soon became interested in music technology, composition and performance and over time, these became the three areas of my research-creation activities.

My interests in music technology lie in the field of computer-assisted instruction in music, particularly in regard to Internet delivery and handheld devices.

For my doctoral dissertation, I created Dolphin Don’s Music School, an educational computer game that teaches music theory and ear training for children. This programme has been used in at least 120 countries.

As a composer, I have published more than 60 pieces of music in western classical and jazz styles, including works for orchestra, choir, jazz band, wind band, chamber ensembles and soloists. These works have been performed and recorded by professional musicians around the world.

In 2015, I was one of the first United States citizens to record music legally in Cuba in more than 50 years when my Latin jazz piece Bugs and Gas was part of a Parma Recordings project involving eight compositions selected from more than 200 submissions.

As a trombonist, I have performed as a bandleader, a soloist and an orchestra member in more than 40 countries on six continents. I am still hoping to book a performance in Antarctica!

I spent five years playing the trombone on 11 cruise ships that travelled across the Caribbean Sea, the Mediterranean Sea and the Gulf of Alaska. The first 10 of these did not sink.

In 1998, four years after my performance with the 5th Dimension, I was back on the same ship when it struck a reef and sank to the bottom of the St. Maarten harbour. That is another story readers can find at donbowyer.com/aground

Professor Don Bowyer is Professor of Music and Dean of School of Arts at Sunway University.