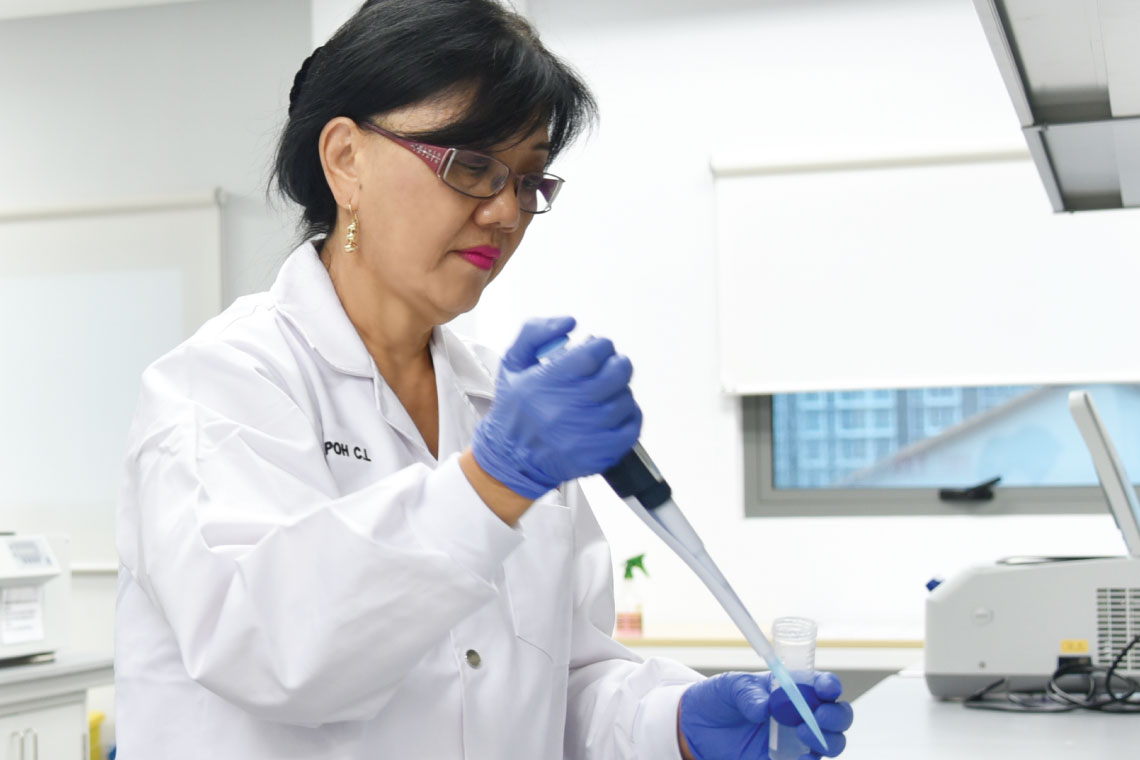 The year was 2000 when an unprecedented outbreak of hand, foot and mouth disease (HFMD) in Singapore claimed the lives of five children. Professor Poh Chit Laa, then a researcher at National University of Singapore, felt herself grieving with a mother who lost two children to the disease. She decided to channel her research focus towards HFMD and its deadly enterovirus 71 (EV-A71). She has never looked back.

I wanted my research to make an impact on lives.

After graduating from Monash University (Australia) in 1980 with a PhD in Environmental Bacteriology, I returned to Malaysia and Singapore to pursue my academic career. However, after seeing the massive HFMD outbreaks, I became interested in medical virology research particularly in developing antivirals and vaccines.

HFMD had taken the lives of many young children in Asia since the 1970s.

In 1997, HFMD claimed the lives of 59 children in East Malaysia. In 1998, at least 78 children died in Taiwan. In China, statistics showed that HFMD claimed at least a few hundred lives and infected 1.6 – 2.1 million children each year. As a scientist, I could look at these figures as mere statistics but what I really wanted to do was help save young lives.

I witnessed a family losing two children within a week.

I was a researcher in Singapore when the outbreak happened. I met a mother who lost two of her three children to HFMD within a week. They were only aged five and seven. The sight of her grief was heartbreaking. I knew then that I wanted to focus on the virus causing HFMD.

Every second counts when it comes to saving lives.

In medical science, we have this maxim: Time is precious. We have to decide quickly on whether to admit a child in an outbreak. In those days, virologists abided by the gold standard of performing a tissue culture to detect the culprit virus, EV-A71. In the two to three weeks it takes for the tissue culture to be ready, and another one to two weeks to serotype the virus via neutralisation test, about 29 days would have passed. By then, it would have been too late for the patient.

My main focus was to develop a quicker way to detect the virus strain.

In an outbreak, time is of the essence. I wanted to develop a rapid diagnostic test for the EV-A71 virus. I worked closely with paediatricians at the National University Hospital (NUH) and Singapore General Hospital. They were very supportive towards my work, knowing that I was trying to find a quicker way to detect the presence of EV-A71 strain in clinical specimens.

Reducing detection time from 29 days to an hour.

My research resulted in the development of a rapid molecular diagnostic assay based on the real-time reverse transcription polymerase chain reaction (RT-PCR). Now, we are able to positively identify the presence of EV-A71 in clinical specimens within an hour, which can quickly guide clinicians in admitting children who need immediate clinical attention.

Detecting the virus strain quickly is only half the battle.

There is still no FDA-approved antiviral or vaccine against EV-A71. At Sunway, I am supervising the development of live-attenuated and synthetic peptide vaccines as well as antiviral peptides for the prevention and treatment of EV-A71 infections. The wild form of EV-A71 virus is potentially very virulent, producing a high amount of viral particles that cause HFMD. By changing amino acids through mutagenesis, my team and I are trying to produce live attenuated vaccines that are less virulent.

Research should be about giving back to society.

I have always held on to the belief that in any research, it must positively impact lives. Scientists should ideally develop interests in research that can contribute to society and help bring the country’s healthcare to the next level.

Passing the baton to young researchers.

In ensuring continuity of best practices, I focus on sharing knowledge, skills and lessons learned with young researchers. I hope their hard work comes to fruition in the near future, and that someday their research findings will impact society in a meaningful way. After devoting four decades to medical bacteriology and virology research, this will be my greatest satisfaction.

In 2014, Professor Poh was appointed Distinguished Professor in recognition of her work. She currently heads the Centre for Virus and Vaccine Research at Sunway University.